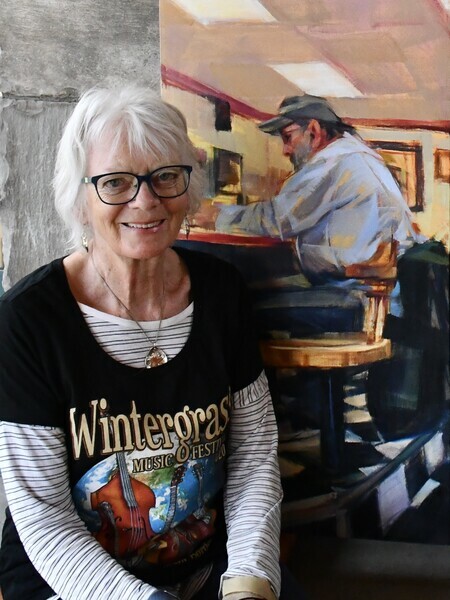 A self-taught artist, Anne-Marie Harvey spent her first 23 years as an artist exploring and painting in oils the wilds of northern British Columbia and the Yukon. She and her artist husband raised their three children in a land accessible only by bush plane. The dynamic landscape and transformational quality of light in the far north were her teachers.

In 1984, Anne-Marie left her beloved northern mountains for a new life on the west coast. Here she was introduced to watercolours, which offered her a challenge even more elusive than northern light! Anne-Marie developed a working relationship with this defiant and delightful medium, and out of mastery came success and security, along with dozens of shows, both solo and group. Watercolour led to acrylic, which finally led to mixed media which seemed to keep Anne-Marie entertained for some time. Only recently, in an attempt to keep her paints wet while plein air painting, has Anne-Marie picked up her oil paints, re-kindling her old love affair with this medium. Currently she delights in painting the Okanagan in an old medium, but using new and freer techniques gained from her years working with watercolours and acrylics.

Anne-Marie’s ability to paint people as well as landscapes won her success in the competition for cover artist and illustrator for the Advocate, the law magazine for B.C. and the Yukon. Each issue features a notable and interesting person in the field of law. With one short interview, Anne-Marie created for the cover a light-hearted portrait, which accurately captures the spirit of this person. This work earned for her a spot as finalist for best illustrator at the Western Magazine Awards in 2003.

Anne-Marie teaches part time for the Federation of Canadian Artists, but mostly she paints, working steadily towards expressing her great passion for simplicity and colour.

In 2006 Anne-Marie and her husband Chris purchased a small piece of land on the Naramata Bench in the Okanagan. They put in the some Riesling grapes and built a splendid home and a bright new studio for Anne-Marie. In September of 2013 they finally moved into their dream home, where they create beauty, explore, make music, explore, drink wine and generally live happily ever after.